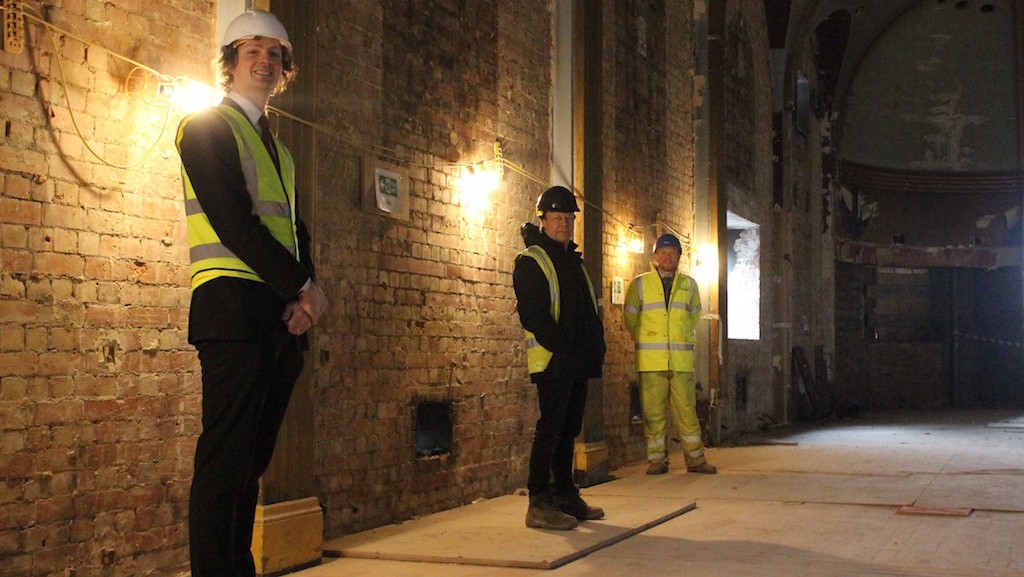 After an extensive procurement process the Keighley based contractor was selected not only for its illustrious client portfolio but also its commitment to social responsibility and the training of local youngsters.

With Bradford Live’s ambition to create circa 50 full time equivalent positions at the venue upon completion of the redevelopment, this appointment will add a further 60 temporary construction jobs to the roster.

Five apprenticeship roles will also be created by RN Wooler during the construction phase. Working closely with Leeds College of Building and Bradford College to oﬀer the apprenticeships to 16 to 18-year-old students, the Bradford Live project will provide practical, workplace opportunities for those studying construction, skills and trades.

In addition, efforts will focus on a strong supply chain of both suppliers and subcontractors from the Bradford District and Leeds City Region. RN Wooler will be looking to Leeds and Bradford-based suppliers in the ﬁrst instance when ordering materials to support the project’s sustainability drive.

The project is partly funded by the West Yorkshire Combined Authority’s Growth Deal – a £1 billion-plus investment aimed at transforming the Leeds City Region economy, by making vital upgrades to transport, building more housing, investing in a skilled and flexible workforce and supporting the growth of cities and towns across West Yorkshire.

With works due to commence later this spring, this is welcome news following the Prime Minister’s indicative timeline for when live events can resume.

Bradford Live Managing Director, Lee Craven, said: “These are exciting times for the Bradford Live project and we are proud to have RN Wooler & Co as part of the team. We want Bradford Live to become part of the community and help drive the Bradford economy. It will be a fantastic venue, delivering 270,000 visitors a year to the city and support not only those involved with the project, but up to 500 FTE indirectly across the region.”

Councillor Alex Ross-Shaw at Bradford Council said: “We are very pleased that this highly skilled local supplier has been awarded this important contract.

“The transformation of Bradford’s iconic former Odeon cinema into a world-class live entertainment and events venue will bring major benefits to Bradford city centre and attract hundreds of thousands of visitors every year.

“Bradford Live is part of a broader commitment we have to supporting the arts and the economic development of the district. The contract will employ 65 people including five new apprenticeships giving the local economy a welcome boost.

“We are immensely proud that local people will play such a critical role in developing this iconic facility which will be enjoyed by many generations to come.”

Director of RN Wooler & Co Ltd, Gareth Wooler, added: “We are particularly honoured and proud to have been awarded the contract for this exciting and prestigious project. As a family owned, Yorkshire company employing local people, the opportunity to create employment and further strengthen our ties to the community is a fantastic achievement and is testament to the hard work and continuing efforts of our colleagues.”

Head of NEC Group Venue Partnerships, Dan Boulger, concluded: “The job opportunities, economic impact and legacy benefits that this project creates will serve the local community for generations and continues to have the full backing of the NEC Group. We very much look forward to seeing RN Wooler & Co bring the visions for this extraordinary building to life.”

R N Wooler & Co. Ltd
In readiness for the commencement of foundation works, the piling rig has been moved into place at our Hawks View development #hawksview #embsay #yorkshire #construction #bespokecountryhomes #luxuryliving #builtontraditionandinnovation

R N Wooler & Co. Ltd
Our colleague, Dylan Mitchell, was invited to play at the 2022 Gibraltar Open by order of merit, following a recent high ranking at Q School.

Dylan lost to Ricky Walden who progressed to the Semi-Final and was ranked 18th in the world prior to the tournament.

Dylan hopes to be invited to other world snooker events throughout the year and we want to congratulate him on his remarkable success to date and hope that there will be more to come! @mitchell.dylan 🏆

R N Wooler & Co. Ltd
Progress apace at Hawks View, Embsay. There are not many settings as beautiful as this! #nofilterneeded #hawksview #embsay #registerinterestnow